Are local democracy and the press under threat?

Concerns have been expressed in Edinburgh that politicians and city leaders may be cutting corners as crucial decisions are made about our city – all during a time when the press is under increased strain due to falling revenue. In this conversation with four leading Edinburgh journalists we will explore the threats to local democracy and press reporting during the coronavirus outbreak.

Joining us for this conversation will be Euan McGrory (The Scotsman), Mure Dickie (Financial Times), Phyllis Stephen (The Edinburgh Reporter) and David Bol (The Herald).

Date: Thursday 25 June 2020
Start time: 6pm
Venue: Zoom online (how to join info will be sent to you via email)

We look forward to seeing you on the evening. If you have any questions, please contact us on the details below.

Minutes of the Leith Harbour and Newhaven Community Council ordinary meeting, held at Leith Community Centre on Tuesday 28 May 2019 at 6:30pm

Actions and decisions are red italic. Nem con means that no-one spoke or voted against an item.

In the chair’s absence, the meeting was chaired by Elaine Dick.

1 Introductions and apologies for absence

Item 11b (R Levick to contact Fort Ports about Rennie’s bridge closure) is held over due to his absence.

4.a Questions and comments

JM noted that the block of affordable flats is to be built by Crudens & Heart: work starts in autumn 2019. Cala has finished the necessary utility work.

7.b Save Leith Walk

8 CCTT (Community Councils Together on Trams)

This is online at CEC’s consultation hub.It closes 3 June 2019.

11.a Request from PLACE Edinburgh group regarding short term lets

11.b Query from business owner regarding garages on Coatfield Lane

There was no discussion of this topic.

D Bremner reported that this map is to help with local place plans (LPPs). LPPs may give opportunities for CCs to state how they would do development differently, and difficulties with development. It may also affect the City Plan.

D Bremner reported that the distillery hopes to receive planning permission by the end of May. This means the shed is likely to be cut up. Ocean Terminal is willing to store the parts for 12 months. The distillery is happy to gift the shed to the ‘people of Leith’. It has no architectural legal protection because it was moved illegally. DB has spoken to the Architectural Heritage Fund about getting funds for scoping new sites and/or reconstruction. Historic Environment Scotland supports this.

J Marlborough reported that a dead female has been floating in the Water of Leith for over a week. RSPCA, RSPB, Wildlife Scotland, Leith Conservation Trust, CEC and the police all denied responsibility. Eventually LCT tried to retrieve the carcass but it was stuck under a bridge. It was eventually retrieved, and attempts are being made to find out why it died. JM also noted that the carcass was put in a bin, but that this has not been uplifted.

12 Date of next meeting 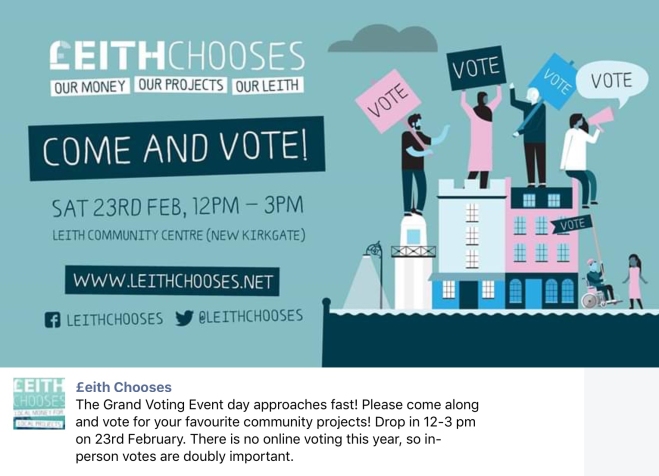 (adapted from an email from the Scottish Government)

Scottish Government is inviting communities to have their say on the themes and issues that have arisen from Democracy Matters conversations that have been happening across the country.

Free informal workshop style events will be taking place across Scotland and will be an opportunity to find out more about the Local Governance Review & Democracy Matters Conversations, meet the team and discuss views and ideas about how Scottish Government can bring decision making to a community level. END_OF_DOCUMENT_TOKEN_TO_BE_REPLACED

((adapted form an email from the Scottish Community Development Centre. Please note that this is an SCDC exercise, linked to the Scottish Government’s Democracy Matters exercise, but LHNCC is very happy to publish anything that might help improve Scotland’s local democracy.)

CHEX is inviting you to an informal conversation about ‘Democracy Matters’ and the future of local decision-making in Scotland.

This will be a chance to come together to learn about the ongoing Local Governance Review and discuss how communities, of place or identity, could have more control of decisions important to them.

Once you have registered your attendance we will send you through a programme.

If you cannot make this conversation but still want to host your own, please let us know the details and someone from CHEX will aim to attend.

Hope to hear from you soon.